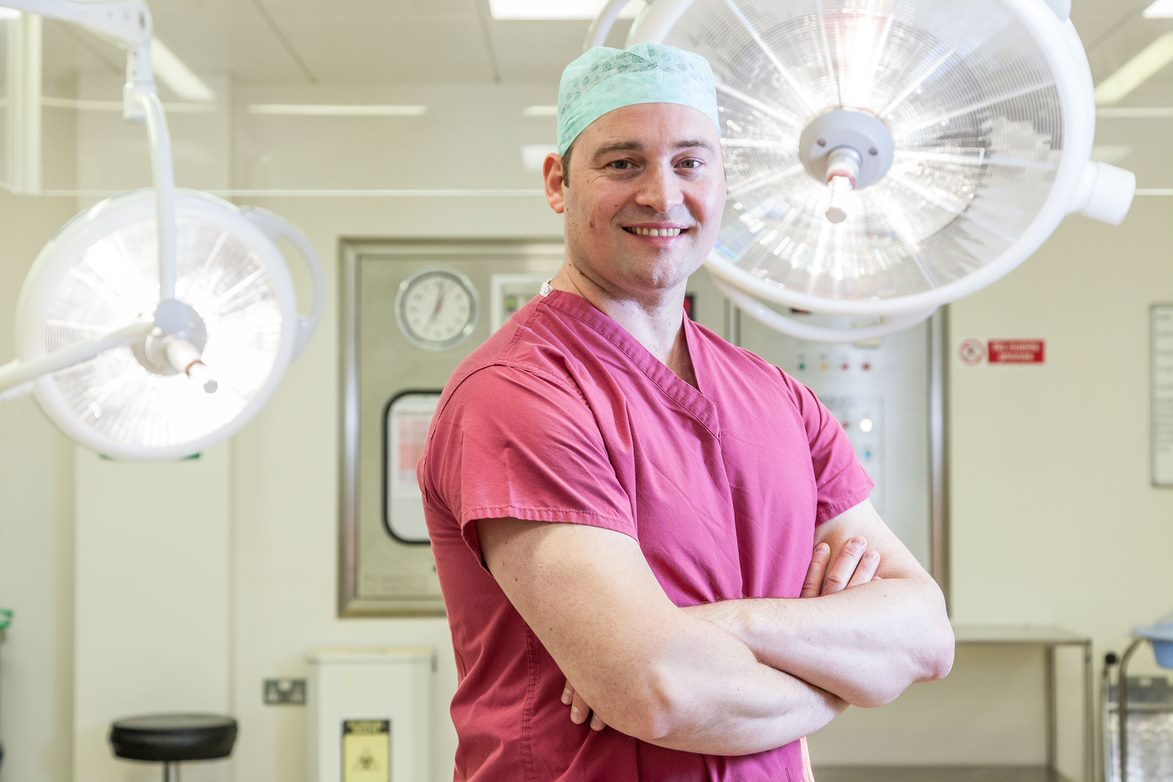 Scott MacInnes is a Consultant Orthopaedic Surgeon who specialises exclusively in shoulder and elbow conditions. He undertook 2 fellowships in Perth, Western Australia, working with internationally renowned Shoulder and Elbow Surgeons. He was awarded a PhD by the University of Sheffield for research examining the genetic contribution to failure of orthopaedic joint replacements. He is employed by Doncaster and Bassetlaw Teaching Hospitals NHS Foundation Trust as an NHS consultant.

Scott grew up in Stirling, Scotland and studied medicine at the Universities of St. Andrews and Manchester, graduating in 2003. He completed his basic surgical training in the North West of England before crossing the Pennines to undertake higher surgical training in South Yorkshire in 2008.

He has a strong academic background. He undertook a postgraduate research degree examining the genetic contribution to joint replacement failure at the University of Sheffield in collaboration with the Sanger Institute in Cambridge and the Norwegian Arthroplasty Registry. He was awarded a PhD in 2017 for this work and has presented nationally and internationally. He has won several awards, including the prestigious Otto Aufranc Award in recognition of pre-eminent excellence in research, presented in the USA. He has also been invited to speak internationally on orthopaedic prosthesis failure. He continues to be actively involved in research and is a scientific peer reviewer for Shoulder & Elbow, the official journal of the British Shoulder and Elbow Society.

Scott spent 18 months in Perth, Western Australia where he underwent subspecialty fellowship training in shoulder and elbow surgery with internationally renowned surgeons. This gave him the opportunity to be involved in complex cases including complex upper limb trauma. He had the opportunity to be trained in state of the art techniques in arthroscopic (keyhole) and open surgery and worked with world leaders in tendon healing.

Scott is actively involved in training orthopaedic surgeons and has recently been appointed as the Royal College of Surgeons specialty tutor for orthopaedics at Doncaster and Bassetlaw. In this role, he is the lead for all postgraduate training in the department.

He married a girl from Doncaster who is now a local GP and they have 3 young children. Outside of work he is a keen swimmer and although his rugby playing days are over he maintains his enthusiasm for the sport from the sidelines.

You’re more likely to develop bunions if your shoes don’t fit properly, you have a family history of bunions, your joints are more flexible than average, you have flat feet/fallen arches, a foot injury or birth defect. Find out more... corielortho.com/conditions/bu… #bunions #bigtoe pic.twitter.com/tRi7G8PuZE

Most of us have heard of a frozen shoulder, but do you really know what it actually is, and how it's caused? To help we've outlined symptoms and treatments on our web page corielortho.com/conditions/fr… #frozenshoulder #symptoms #treatments pic.twitter.com/X0YUTeSFhV

The #patella or #kneecap, is a disc of bone that sits on the front of your knee suspended between the thigh and shin bones by tendons. The kneecap comes under a lot of stress and also protects the knee joint by acting as a physical shield. More info here, corielortho.com/conditions/pa… pic.twitter.com/2PNXvz9oLA

Be careful out there everyone. Warm weather and exercise means you have to be more aware of #dehydration. This means your body loses more fluids than you take in. If it's not treated, it can get worse and become a serious problem. nhs.uk/conditions/deh… pic.twitter.com/7sesb9uRS7

Pain within the hip joint is most often, but not always, experienced in the groin. Pain over the outside of the hip is usually not caused by a hip joint problem and is more commonly related to hip bursitis or a pinched nerve in the back. Find out more corielortho.com/area/hip-groi… pic.twitter.com/G2GIW1bKX6